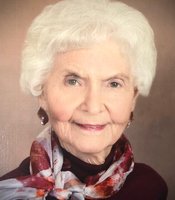 Age 88, of Morris, IL passed away peacefully Monday, September 23, 2019 at the Joliet Area Community Hospice Home.  Born in Watseka, IL on February 3, 1931, Beverly was the daughter of the late Harold and Elsie M. (nee Fugett) Wilson. She attended Lockport High School and St. Joseph School of Nursing in Joliet, IL.

She was preceded in death by her husband, Alan P. Spangler; her parents; brother, Harold R. Wilson and sister, Mae Wilson.

Bev retired as a registered nurse after serving many years in surgery and the ER at Morris Hospital. She was also the director of the American Red Cross Blood Mobile and a longtime active member of First Presbyterian Church in Morris. She also belonged to the PEO and the women’s golf league at the Morris Country Club.

Other hobbies and interests included reading, traveling and singing in the choir at First Presbyterian, and her church in Tucson, AZ where she and her late husband enjoyed many winters until his passing in 2007. She continued living in Tucson after she lost Al, remaining active in her community and with her bowling league there until age 85, when she returned to Morris.  Although Bev enjoyed the above activities, nothing made her smile brighter than being with family.

Visitation for Beverly Jean Spangler will be held  on Friday, September 27, 2019, from 4 – 8 p.m. at the Fred C. Dames Funeral Home, 1201 W. Route 6 at Deerpath Drive in Morris.  Funeral Services will be held Saturday, September 28, 2019 at the First Presbyterian Church, 200 E. Jackson Street, Morris, where visitation will resume from 10:30 a.m. until services begin at 11 a.m.  Active pallbearers will be, Darin Condon, Erik Spangler, Adam Spangler, Jordan Leitner, Luke Jackson, CJ Komarynsky, and honorary pallbearer, Ty Perez. Cremation rites will be accorded following services and inurnment will be held privately by the family at Woodlawn Memorial Park in Joliet, IL at a later date. Beverly requested no flowers, but rather memorials in her name can be made to First Presbyterian Church or Joliet Area Community Hospice.  For more information, please call (815) 942-5040 or visit her Memorial Tribute at www.fredcdames.com