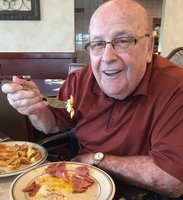 A graduate of Joliet Catholic High School, Class of 1952, he attended Lewis University before enlisting in the U.S. Air Force, serving four years in the Korean War as an aviation mechanic.  He was employed by Northern Illinois Gas for 37 years before retiring in 1993.  Tony loved being with his family, the outdoors, fishing, boating, golfing, home and car repair projects.  He was also an avid Chicago Cubs fan, sharing the excitement of their 2016 World Series win.  Tony and his wife, Doris, enjoyed spending winters in Florida for over 25 years.  They also volunteered for Hope Hospice in Fort Myers, FL for many years.

He was preceded by his parents and two sisters, Beatrice (late Chuck) Host of Sandwich, IL and Louise (late Edward) Strle of Lockport.

The family would like to sincerely thank his special caregivers, Selina, Terry and Sue, as well as the staff of Joliet Area Community Hospice, for their wonderful and compassionate care.

Visitation for Tony Kosicek will be held on Tuesday, October 8, 2019 at St. Paul the Apostle Catholic Church, 18 Woodlawn Avenue, Joliet, from 9:30 a.m. until a Mass of Christian Burial being celebrated at 11:30 a.m.  Interment will follow at Abraham Lincoln National Cemetery.  Full Military Honors will be conducted under the auspices of the U.S. Air Force and the Abraham Lincoln National Cemetery Memorial Squad.  In lieu of flowers, memorials in his name to Joliet Area Community Hospice would be appreciated.  For more information, please call 815-741-5500 or visit his Memorial Tribute at www.fredcdames.com