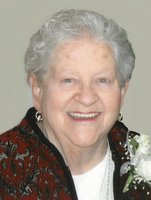 Margaret Mary Boyd, or “Muggs”, as she was fondly known as, passed away on Saturday, March 14, 2020, at Joliet Area Community Hospice surrounded by the love of her family, after a lengthy battle with dementia.  She was a Lockport resident during her younger years and graduated from Sacred Heart, now St. Dennis, and Lockport Township High School. As a senior, she won 1st and 2nd place medals in the Illinois typing competition in Chicago in 1945. She was also a member of the band.

Muggs retired as a secretary from the ICG Railroad in Joliet and was a past president of the St. Ambrose CCW. Muggs was very proud of her Irish heritage and instilled into her daughters and grandchildren. After retirement, Muggs and Don lived in New Port Richey, FL for 15 years, returning to Joliet in 2000.

She is preceded in death by her loving husband of 62 years, Donald (2010); her parents, Joseph and Ruth (Dougherty) Bapst; sisters, Hazel Schmidt, Elizabeth “Di” O’Leary, and Bridget “Bonnie” McHugh; one granddaughter, Megan Benedict; and her Godchild, Kathleen McCanna.

The family would like to thank the staff of Rock Run Memory Care for their loving and compassionate care given to Muggs, especially Lisa, Rob, Katie, Shannon, Sarah, and Elena… you guys are awesome!!  Also thanks to Joliet Area Community Hospice Home for their kindness and generosity.

Funeral Services for Margaret Mary Boyd will be held on Tuesday, March 17, 2020, at the Fred C. Dames Funeral Home, 3200 Black Rd. (at Essington Rd.), Joliet, at 10:00 a.m. to St. Patrick Catholic Church, 710 W. Marion St., Joliet for Mass of Christian Burial to be celebrated at 11:00 a.m. Interment will follow at Resurrection Cemetery in Romeoville. Visitation will be held Tuesday morning from 8:00 a.m. to 10:00 a.m. at the funeral home. In lieu of flowers, memorials in her name to Joliet Area Community Hospice would be appreciated.