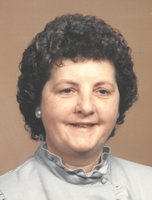 Irene Josephine (Quigley) Wonnell, age 86, of Joliet, went home to be with the Lord on Thursday, May 7, 2020 at Salem Village Nursing Home.

Born November 8, 1933 in Joliet, she was the daughter of the late Vincent and Theresa (Seehafer) Quigley.  She married Edwin L. Wonnell, Sr., and he preceded her in death April 17, 2000.  One brother, Robert F. Quigley; one sister, Carol A. Ringo; and two grandsons, Daniel Wonnell Quiett and Kenneth A. Quiett, Sr., also preceded her in death.

Irene was a loving and caring wife, mother, grandmother, great-grandmother, sister and aunt.  She loved to work in her flower garden, and while her husband was still living, enjoyed camping.  She was a longtime member of First and Santa Cruz Lutheran Church.

Graveside services for Irene Wonnell will be held at a later date at Abraham Lincoln National Cemetery.  Fred C. Dames Funeral Home is in charge of arrangements.