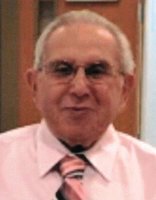 Age 82, of Channahon, passed away peacefully at the Joliet Area Community Hospice Home on Sunday morning, October 11, 2020.  He was born on October 27, 1937 in Joliet to the late John and Victoria (Pennuto) Fodero.  His father passed away when Dom was young and he went to live with his Uncle and Aunt Frank D. and Dottie Fodero in Berwyn.

Dom graduated from Morton East High School and went on to serve in the United States Air Force in November 1960 until he was honorably discharged in 1964.

Dom was employed by Dravo Mechling for 25 years and retired from the Village of Channahon after 20 years of service.

Visitation for Dominic Angelo Fodero will be held Thursday, October 15, 2020 at the Fred C. Dames Funeral Home, 3200 Black Rd., Joliet, from 3:00 – 7:00 p.m. In accordance with the Illinois guidelines, a 50 person capacity at one time will be followed.  Face masks are required and social distancing will be observed. Funeral Services will be held Friday, October 16, 2020 at 11:00 a.m. at the funeral home chapel.  Interment will follow at Willard Grove Cemetery, Channahon. For more information please call (815)741-5500 or visit his Memorial Tribute at www.fredcdames.com where you can share a favorite memory or leave a condolence.