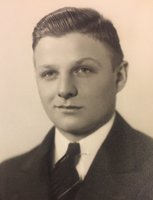 And flights of Angels sing thee to thy rest.

His death came from complications of several health issues and was not COVID related, his family noted.

He leaves a large and loving family, including his sister Joan McManamon of Altadena, CA; 10 children and their spouses:

Also surviving are his loving former daughter-in-law Mary Lynn Odenthal (Mark) and his devoted caregiver of the past several years Jutta Sonnefeldt.

Born in Vanderbilt (PA),  John moved with his parents (John T. and Julia (Pollack) Softcheck) to Chicago at a young age and attended St. Rita's High School and Loyola University in Chicago, from which he received both his bachelor's and law degrees.

He served in World War II and attended law school through the GI Bill.  He then worked more than 40 years in legal roles for the federal government and in retirement as a government contractor/consultant.  His roles included Chief of the Procurement Law Division of the U.S. Army Munitions Command in Joliet (where he was noted for outstanding work in The Army Lawyer in December 1972);  Chief of Staff for the Department of Defense's Ammunition Procurement and Supply Agency in Joliet; Chief Legal Counsel for Fermi National Accelerator Lab near Chicago; and Chief of Legal with Argonne National Laboratory for the Atomic Energy Commission (later a part of the Department of Energy).

He was admitted to the bar of the State of Illinois in 1949 and to the bar to the Supreme Court of the United States in 1965.

He was a founding parishioner of St. Jude Catholic Church in Joliet and also attended the Cathedral of St. Raymond Nonnatus in Joliet.

Funeral Services for John Edward Thomas “Jack” Softcheck will be held on Friday, October 23, 2020, at the Church of St. Jude, 2212 McDonough St., Joliet, where a Mass of Christian Burial will be celebrated at 10:00 a.m. Friends and family are invited to arrive at 9:45 a.m. to be seated before Mass begins. Interment will follow at Woodlawn Memorial Park. A celebration of his life will take place when we all may gather again.

Known for his dry wit, he often joked that because he skipped second grade, whenever he was asked a question to which he didn't know the answer he would reply that the subject must have been taught in second grade.

John fostered a love of nature and the great outdoors in his family through his gardening and by taking them on hiking trips to Starved Rock.  He also instilled a love of history and the natural world, with trips to the Museum of Science and Industry, Brookfield Zoo and Escanaba (MI) for an annual family vacation. And his making of jam from the fruits of his garden led several of his children to follow his example to this day.

His children, who are grateful to have his example of a life led with courtesy, kindness, justice, faith, humility, humor, generosity and love, recall asking him each birthday and Christmas what gift he would like.

In lieu of flowers, the family suggests a contribution to Misericordia (providing care to those with developmental challenges) at 6300 N. Ridge Ave., Chicago, IL 60660 or misercordia.com; to St. Jude Children's Research Hospital at 501 St. Jude Place, Memphis, TN 38105 or stjude.org;  or to a charity of your choice.

Or, in memory of an exceptionally kind man, perform a random act of kindness.

For more information, please call 815-741-5500 or visit his Memorial Tribute at www.fredcdames.com where you may leave an online condolence or share a favorite memory.

Loss leaves a heartache no one can heal.

Love leaves a memory no one can steal.