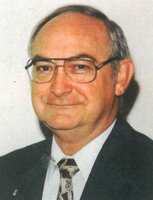 Gerald “Jerry” Thom, a lifelong Joliet resident, passed away at the age of 83, Monday evening October 18, 2021.

He was born May 17, 1938 to the late Mabel (nee Sullivan) and Harold Thom.  Jerry graduated with the class of 1957 from Joliet Catholic High and received a bachelor's degree from Lewis University.

He married Margaret Campbell on November 23, 1963 at the Cathedral of St. Raymond.

Jerry retired from St. Joseph Medical Center as a Manager of Central Supply after many years of service.  He was also a real estate agent for Coldwell Banker.  His hobbies included aeronautics, woodworking, and tinkering.  He also enjoyed the annual August fly-in to Oshkosh, WI, periodic fishing trips over the years and simply spending time with his family.

Funeral services for Jerry will be held Friday, October 22, 2021 at the Fred C. Dames Funeral Home 3200 Black Rd. (at Essington Rd.) Joliet where visitation will begin at 11:00 a.m. until services start at 1:00 p.m.  Interment will follow in Resurrection Cemetery Romeoville, IL.

In lieu of flowers memorials in honor of his daughter, Amy Elizabeth Thom can be made to the Cystic Fibrosis Foundation.