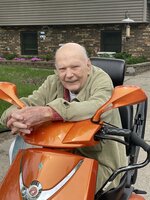 Robert Ralph Messel aka ‘Scooter Bob’ born September 15, 1940, in Chicago, IL, and also of Brookfield, IL, passed away peacefully at his home in Morris, IL with the assistance of Lightways Hospice on Thursday, June 30, 2022, with his loving son, Scott, and daughter-in-law, Lorraine by his side.
Robert served in the US Marines during the Vietnam War. He enjoyed his time at the Morris VFW playing Queen of Hearts every Monday as well as the Morris Legion where he was a proud member of the Marine Corps. League.  He will be greatly missed cruising around Morris on his scooter no matter rain nor snow.
Robert is survived by his three sons, Robert (Andrea) Messel, Scott (Lorraine) Messel, and Kevin (Liz) Messel; grandchildren, Jonathan, Kristen, James and Katelyn Bach, Alivia Phelps, Morgan Messel, and Rachel Messel; and his sister Judy (Joe) Dietz.
He is proceeded in death by his beloved wife of 37 years, Elaine T. Klimek-Messel on January 15, 2004; his parents Walter Francis and Helen Agnes (nee Koblick) Messel; and brothers, Walter ”Bud” Messel and Jim “Gums” Messel.

Visitation for Robert Messel will be Thursday, July 7, 2022, from 11:00 a.m. until 1:00 p.m. at Fred C. Dames Funeral Home in Morris. From there Robert will be taken to Abraham Lincoln National Cemetery, Elwood, where he will receive Full Military Honors from the United States Marine Corps. For information, please call (815) 942-5040 or visit his Memorial Tribute at www.fredcdames.com where you can share a favorite memory or leave a condolence.