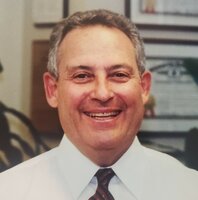 Ron, and his late identical twin brother Jerry, were born in Peoria, IL on February 18, 1936, to the late Louis and Leah (nee Kahn) Galowich. The family moved to Joliet where Ron and Jerry attended elementary school and graduated from Joliet Township High School in the class of 1953. Ron and Jerry continued their education at the University of Illinois-Urbana Champaign where they each received a BS degree in commerce and law in 1957 and a JD degree in 1959. Both Ron and Jerry proudly served as 2nd Lieutenant in the Army Ordnance and JAG Corps at Aberdeen Proving Ground. After leaving the service, Ron and Jerry returned to Joliet and founded the law firm of Galowich & Galowich. In 1975, Jerry died in an airplane accident while returning from a meeting of the Illinois State Bar Association Board of Governors. A few years later, Ron left his law practice to join Pritzker and Pritzker where he ran the family’s non-hotel real estate operations for a number of years. Ron also co-founded Healthcare Compare with his close friend from Joliet, Dr. Robert J. Becker. Ron served as general counsel and a member of the Board of Directors of the company which went public and subsequently changed its name to First Health Group. In 1990, Ron formed Madison Realty Group and Madison Group Holdings where he completed several land development projects in metropolitan Chicago and also started Madison Information Technologies (subsequently renamed Initiate Systems). With Ron serving as Chairman of the Board, Initiate Systems became a successful multinational software company that was sold to IBM in 2010.

Ron’s greatest passion in life was his family followed closely by his many beloved pets, friends, and flying. He would bend over backwards to help friends and family, particularly in his role as an amateur medical adviser where he became lovingly known as Dr. Ron. He was an accomplished pilot that flew his own jet and held an airline transport rating. Ron was involved in numerous philanthropic pursuits including as chairman of the Joliet YMCA’s Development committee, a board member of Athletes Against Drugs, a member of the leadership committee of the Cancer Institute at Rush University Medical Center, President of the Board of Visitors of the University of Illinois College of Law, and Chairman of the Board of Directors of Parkinson's Action Network (PAN).

Ron is the beloved husband of Linda (nee Kroupa) Galowich; loving father of Jeff (Elizabeth) Galowich, Bob (Lee Ann) Galowich, and Pamela Galowich; proud grandfather of Adam, Jenna, and Rachel. Ron had a special relationship with and is also survived by Jerry's wife Deena Galowich Hyman, and their children David (Dana) Galowich and Lynn (Leon) Galowich Page, their grandchildren Justin, RyAnne, and Marissa as well as many dear in-laws, nieces, nephews, and friends.

Ron is preceded in death by his parents Leah and Lou, his brother Jerry, his aunt Myrtle Kahn and his former wife, Eleanor Bernstein Baker.

Funeral Services for Ronald H. Galowich will be held at the Joliet Jewish Congregation, 250 N. Midland Avenue in Joliet where all friends and relatives can gather Wednesday, July 27, 2022, from 10:30 a.m. until services begin at 11:00 am (masks requested). Interment will follow in Mt. Moriah Cemetery. Shiva will be Wednesday evening at 7:00 p.m., at 2118 Sunset Ridge, Glenview. We are attempting to arrange for virtual service; please see the funeral home website via the link below.

In lieu of flowers, memorials in Ron’s name can be made to Greater Joliet Area YMCA, Joliet Jewish Congregation, or Michael J. Fox Foundation.

For more information, please call 815-741-5500 or visit his Memorial Tribute at www.fredcdames.com where you can share a favorite memory or leave a condolence.