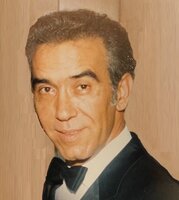 Gust attended Joliet Grade Schools and graduated with the Class of 1960 from Joliet Township High School.

On September 8, 1962 he married Judith Wamsley.

In addition to Judi, his loving wife of 60 years, Gust is also survived by his son Thom Kontos, beloved grandchildren Cody Alimondi, Tasia Frese, Chance Kontos as well as five great-grandchildren, all who referred to him lovingly as "Papou". His sister Marylou Cope, the "brother he never had" Don Robertson, Joyce and Mike Gardner, and his favorite pair of card players Pat and Bill Paku. Many cousins also survive.

He was preceded in death by his mother and his cherished daughter, Dawn Alimondi, who passed away on March 23, 1993 after a brief illness. He is also preceded by his faithfully devoted companion Peeves.

Gust retired from the Will County Sheriff's Department after many years of dedicated service.

Despite the profound grief he faced in life after the passing of his daughter, Gust remained upbeat and optimistic. He could always be relied upon to offer a hearty greeting, a firm handshake, and a bit of humor to help set the mood.  He truly was a genuine human being who could make a stranger at ease, and a friend just slightly uncomfortable enough to illicit smiles all around. Gust believed strongly in a patriotic love for his country, boundless love for his family, and his devotion to the Green Bay Packers, Chicago White Sox, and "The King" Elvis Presley.  He loved sharing time with the family either fixing up old cars, playing cards, or just watching a classic old western on the television. In the midst of the great sadness brought on by his passing, the family takes comfort knowing that if Gust were able, he would use his quick-witted humor to help mend their aching hearts.

As it was Gust's wish, services and interment at Lincoln Memorial Park in Aurora, IL were held privately.