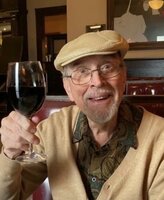 Marlyn Jay Noteboom passed away on November 19, 2022, after a beautiful life full of love and adventure.

Jay was born on September 16, 1944, in Davis, SD to Joyce Noteboom (Sorenson) and Marvin Noteboom. He lived on a nearby farm with his parents and four siblings for the first 12 years of his life. During this time, he loved exploring the farm, climbing trees, and playing with his sister. He attended a one room school house where his love of learning began. His family then moved to the more populated city area of Sioux Falls. While in high school, he formed and played guitar for a rock band named “The Jadesmen”, who went on to be inducted into the South Dakota Rock and Roll Hall of Fame. After high school, he enlisted in the Marines where he served proudly for 4 years. He was stationed in places such as Hawaii and Okinawa, Japan. While in the Marines, he married Kathy Joyce in January of 1964. Later that year, they were blessed with a daughter, Marilyn Tammeling (Noteboom). After his tour of duty ended, he used the GI bill to study English at Augustana University and Purdue University where he earned two Bachelor degrees and one Masters degree. Jay relocated to Illinois and went on to teach English at Moraine Valley Community College in Palos Hill, IL for 30 years. After the passing of his wife, he married Joanne Hendrickson in 1983. They had two children, Becky McBoom (Noteboom) in 1990 and Rachel Noteboom in 1992. After his retirement from teaching, he went on to write and publish 13 novels under the pen name I.M. Tillerman. He cited authors such as Ernest Hemingway, Tennessee Williams, and William Shakespeare as some of his greatest influences.

Jay was a gentle, loving, and brilliant man. He loved reading, playing guitar, attending rock concerts, learning about astronomy, playing poker with his friends, traveling, writing, attending plays and musicals, learning new things, and spending time with his family. He had a love of literature, religion, classical music, science fiction, and rock and roll.

Upon his arrival in heaven, he was greeted by his parents, Marvin and Joyce Noteboom; his brother, Owen Noteboom; his sister, Sharon Hippen; his wife, Kathy Noteboom; and the many friends (both human and animal) that were blessed to share their journey with him.

He leaves behind his two sisters, Jacki Crandall and Dee Martin; his three children, Marilyn (Pete) Tammeling, Becky (Janell) McBoom, and Rachel Noteboom; his grandchildren, Katie Kelley and Megan Kelley; his partner, Barb Russell and many nieces, nephews, and friends.

In lieu of flowers, his family requests that donations be made to Disabled American Veterans (DAV), or any other organization that honors his legacy. A small memorial will be held at a later date. His family would like to thank everyone who has reached out to provide support as well as the angels at Lightways Hospice and Serious Illness Care for making his final journey as comfortable and meaningful as possible. In the words of Hamlet, one of his favorite literary characters, “Goodnight, Sweet Prince.” We will carry you with us in our hearts forever.

Arrangements entrusted to Fred C. Dames Funeral Home, Morris. For information, please call (815) 942-5040 or visit his Memorial Tribute at www.fredcdames.com where you can share a favorite memory or leave a condolence.