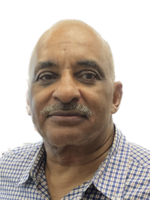 David D. Johnson Sr. has taken his final rest at his home in Aurora, Il on Wednesday, January 4, 2023.

David graduated from Joliet Central High School in 1976.  He is known for his exemplary work ethic which started while he was in high school.  His employment history began with the McDonald's Corporation as the assistant store manager.  He later became employed at Caterpillar Tractor Company.  Lastly, he began a career with the Illinois Department of Corrections, at the Illinois Youth Center in St. Charles, IL.  Throughout his career at IYC St. Charles, he taught, mentored, inspired, lead, and loved many people, from the young men under his care to his fellow employees.

David was an avid sports fan and played on several amateur basketball teams. He was a member of the Free and Accepted Masons, as well as CB radio and Motorcycle organizations.  He was given the moniker "White Cloud" due to the white cloud of smoke that he left behind when performing motorcycle burnouts.  David enjoyed spending time and breaking bread with his friends and family.  You could always depend on him to show up in support and encouragement of his loved ones.  He devoted the last five years of his life taking care of his aging father until the decline of his own health.

The family of David D. Johnson would like to express our sincere appreciation for the many calls, cards, prayers, and expressions of sympathy and love shown during our time of bereavement.  We find comfort in knowing that DJ knew and loved the Lord.  One of his favorite scriptures was Psalm 121:1-2 KJV, "I will lift up mine eyes unto the hills from whence cometh my help.  My help commeth from the Lord which made heaven and earth."

For more information, please call (815) 741-5500 or visit his Memorial Tribute at www.fredcdames.com where you may leave a condolence or share a favorite memory.