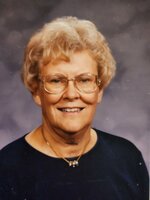 Janet A. Trizna, age 85, entered eternal life on Friday, January 13, 2023 at the Lightways Hospice Home in Joliet. Born in Joliet on March 27, 1937 to the late Raymond and Mary Rub, she lived her early years in Minooka.  After her marriage to Richard Trizna, the two settled in Crest Hill and raised their family there.

She is proceeded in death by her loving husband, Richard M. Trizna(2013); her parents, Raymond and Mary E. (nee Morrissey) Rub; her sister Rita (nee Rub) Ruddy; and grandparents Lawrence and Jeanette Morrissey and Fred and Anna Rub.

She received her Bachelor’s Degree from St. Francis University and her Master’s Degree from Lewis University. After teaching for 4 years at various different schools, she taught 40 years for Valley View 365U and substituted there another 10 years. She was the first learning disability teacher and initiated the districts first kindergarten and early childhood classes. She treasured the time she spent with the children and people of valley view.

Janet was an adult literacy volunteer, and held offices for the Crest Hill Baseball Auxillary and the American Slovenian Home.

She firmly believed that what we do unto others gives meaning and purpose to our pathway to eternal life.

Visitation for Janet Trizna will be Thursday, January 19, 2023 from 4-8 p.m. at the Fred C. Dames Funeral Home, 3200 Black Rd. (at Essington Rd.), Joliet. Private family services will be held, and interment will take place at Abraham Lincoln National Cemetery in Elwood, IL, where Janet will be laid to rest next to her late husband Richard.  In lieu of flowers, memorials in her name can be made to the Sisters of St. Francis Retirement Fund, Big Brothers/Big Sisters of Will County or the Salvation Army. For more information, please call 815-741-5500, or to leave an online condolence, visit her memorial Tribute Page at www.fredcdames.com.