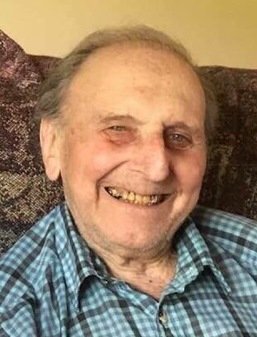 Obituary of Louis A. DeAcetis

He attended Joliet Township High School until his senior year when he joined the United States Army to serve in World War II.  He served with the 10 Army, Headquarters Division, training for the Invasion of Japan, and participating in the Battle of Okinawa.

He began his career as a steel worker with the former American Steel and Wire, and retired from U. S. Steel after many years of service.

He is survived by one brother, James DeAcetis; and many nieces and nephews.

He was preceded in death by five sisters, Adeline, Margaret, Frances, Virginia and Elizabeth; and two brothers, William and Raymond in infancy.

Visitation for Louis DeAcetis will be held Thursday, January 10, 2019 beginning at 10:00 a.m., at the Fred C. Dames Funeral Home, 3200 Black at Essington Roads, Joliet.  Funeral services will immediately follow at 11:00 a.m.   Interment will be in Woodlawn Memorial Park where military honors will be accorded under the auspices of the United States Army.

Share Your Memory of
Louis
Upload Your Memory View All Memories
Be the first to upload a memory!
Share A Memory
Plant a Tree