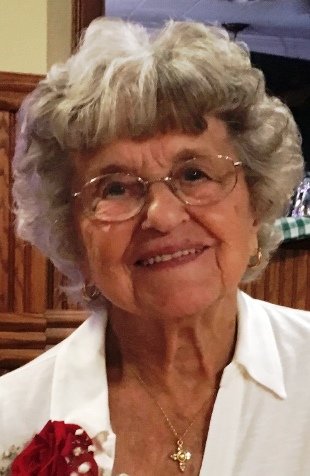 Please share a memory of Dorothy to include in a keepsake book for family and friends.
View Tribute Book

Dorothy Bucciarelli, age 97, went to be with the Lord on Sunday, March 3, 2019.  She passed away at Our Lady of Angels Retirement Home in Joliet, following a brief illness, surrounded by her family.

Dorothy was born in Joliet to Stanley and Elizabeth Widlowski on July 28, 1921, the eldest of four children.  She attended Holy Cross Catholic Grade School and later, Joliet Township High School.

On November 16, 1941, she married her first husband, The Honorable John R. Jaworski, at Holy Cross Catholic Church.  She soon became a new mother, raising two daughters, Judith and Elizabeth, while her husband served in the Army Air Corps during World War II.  Two more children followed a son, John, and a daughter, Christine.

“Grandma Dee”, as she was affectionately called, was a shining example of the men and women who comprised the “Greatest Generation”, preserving through the Great Depression, enduring World War II, and always putting others ahead of self, and always doing things right.  She constantly led by example, and her love for her family and friends was totally unconditional, never uttering a negative or unkind word about anyone.  Dorothy was a great supporter of the American Legion band where her first husband, John, and son, John, were members.  Dorothy was employed at the Will County Recorder of Deeds Office for many years.  She was dedicated to and supported the VFW Post #367 along with her second husband, Delso, during the fish fry’s, many parades, events and the Woman’s Auxiliary.  Her loss will be mourned by family and friends, but her warmth and loving ways will remain within us forever.

She was preceded in death by her parents, Stanley and Elizabeth Widlowski; husbands, John R. Jaworski and Delso Bucciarelli; and infant sister, Virginia Widlowski.

Visitation for Dorothy M. Bucciarelli will be held on Friday, March 8, 2019, from 4:00 until 8:00 p.m., at the Fred C. Dames Funeral Home, 3200 Black at Essington Rds., Joliet.  Funeral Services will be Saturday, March 9, 2019 at 9:00 a.m. from the funeral home chapel to Our Lady of Angels Retirement Home, 1201 Wyoming Ave, Joliet, where a Mass of Christian Burial will be celebrated at 10:00 a.m.  Interment will follow at Mt. Olivet Cemetery.  The family has designated Joliet Area Community Hospice, Our Lady of Angels Retirement Home or the Will County Humane Society for memorials donations.  For more information, please call 815-741-5500 or visit her Memorial Tribute at www.fredcdames.com

The family has designated Joliet Area Community Hospice, Our Lady of Angels Retirement Home or the Will County Humane Society for memorials donations