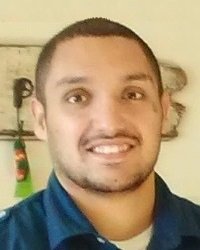 In addition to his father Paul, he is also preceded in death by his paternal grandparents, Joseph and Frances Palacios, and an uncle, Michael Anderson.

Felipe will be remembered as a fiercely loyal friend who loved hanging out with family and friends.  He easily made his nieces and nephews laugh; they always looked up to Felipe.  He coached girls softball for the Spanish Center with his brother, umpired for Belmont Little League (and played there when he was younger), and worked in the construction trades.  A fan of the IKWF, Chicago Cubs and Minnesota Vikings, Felipe also enjoyed listening to country music and eating well.

All friends and relatives are invited to gather on Sunday, September 29, 2019, from 1:00 p.m. until Memorial Services begins at 4:00 p.m., at the Fred C. Dames Funeral Home, 3200 Black at Essington Rds, Joliet.  As it was Felipe’s request, cremation rites have been accorded.  In lieu of flowers, memorial donations to the family would be appreciated.  For more information, please call (815) 741-5500 or visit his Memorial Tribute at www.fredcdames.com

In lieu of flowers, memorial donations to the family would be appreciated.

Share Your Memory of
Felipe
Upload Your Memory View All Memories
Be the first to upload a memory!
Share A Memory
Plant a Tree