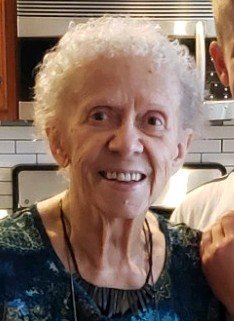 Age 91, a lifelong resident of Joliet, IL before retiring to Benton, KY, passed peacefully Monday, November 4, 2019 at Senior Star Memory Unit, Romeoville.  She was born March 21, 1928 to the late Doris (nee Young) and Emil Brusatori in Joliet, IL where she was raised and educated, graduating with the Class of 1945 from Joliet Township High School.  She then attended the American Academy of Art in Chicago, beginning a lifelong journey of artistic expression in oils, pastels, graphite, stained glass, and many other fine art mediums.

On April 15, 1951, Dodee married John “Jack” Sergeant at the Church of St. Anthony in downtown Joliet.

She was preceded in death by her loving husband of 68 years, John “Jack” Sergeant (3/29/2019); her parents; and an infant son, Jeffrey Sergeant.

Doris was a member of the Joliet Women’s Club, Council of Catholic Women and past president of the Mother’s Club at St. Patrick Church in Joliet, where she and her family were active parishioners for many years.  Dodee never missed an opportunity to share her smile or sense of humor with those around her.

In 1993, Jack and Dodee retired to Kentucky Lake area, where they enjoyed many years of friendships, family visits, and where their mutual love of art flourished.  Dodee and Jack continued as community leaders, being members of St. Henry’s Parish in Hardin, and the Paducah Area Painters Alliance (PAPA) where they both served on the board and exhibited artwork regularly.

Visitation for Doris Sergeant will be held on Thursday, November 7, 2019, from 4:00 until 8:00 p.m., at the Fred C. Dames Funeral Home, 3200 Black Rd. (at Essington Rd.) Joliet, IL.  Funeral services will be held Friday, November 8, 2019 at 8:45 a.m. from the funeral home to St. Andrew the Apostle Catholic Church, 505 Kingston Drive, Romeoville, IL, where a Mass of Christian Burial will be celebrated at 10:00 a.m.  Interment will be held privately at Resurrection Cemetery, Romeoville.  In lieu of flowers, memorials in her name can be made to Senior Star Memory Care Center, 600 S. Edward Drive, Romeoville, IL 60446 or the Alzheimer’s Association.  For more information, please call (815) 741-5500 or visit her Memorial Tribute at www.fredcdames.com

Interment will be held privately at Resurrection Cemetery, Romeoville.

In lieu of flowers, memorials in her name can be made to Senior Star Memory Care Center, 600 S. Edward Drive, Romeoville, IL 60446 or the Alzheimer’s Association