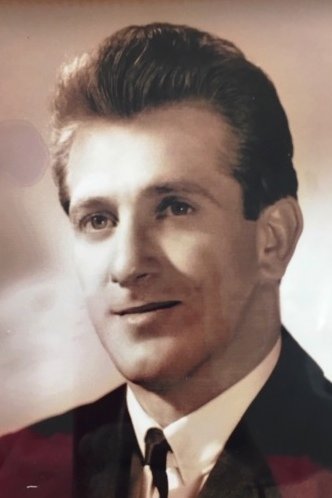 On Monday, May 11, 2020, Kenneth Robert  “Duke” Jenco, loving father, passed away at the age of 79, in an auto collision on Midland Avenue in Joliet.

Duke was born November 17, 1940 in Joliet, IL.  He worked in the Local #444 as an ironworker until an injury sent him into early retirement.  Duke lived on South Grand Avenue in a home he enjoyed immensely.

On August 12, 1967 Duke married his high school sweetheart, April Stevens, also from Joliet.  They raised their only child, Jeff, now age 50, who currently resides in San Diego, CA with his loving wife, Rhonda.  Duke adored his mother, Marie Rossi, and cared for her throughout her life.

Duke and April lived in Tucson, AZ from 1991 to 2007, where they enjoyed tending to their four-acre property, golfing, and spending time with loved ones.  In 2007, Duke and April moved back to Joliet, where Duke lived out the remainder of his life.

Duke had a passion for golf, cooking, spending time with friends at Louie’s Café and the Stone City VFW.  Duke’s greatest joy came from the relationship he had with his son, Jeff.    Duke boasted to all who would listen about Jeff’s success as a vice-president of a commercial general contractor firm in San Diego, California.

Due to the current COVID-19 pandemic, funeral services will not take place.  However, sometime next month, Jeff and April will host a brunch “on Duke”, in Duke’s honor at the Stone City VFW in Joliet, IL.  Date to be determined.

Fred C. Dames Funeral Home is in charge of arrangements.  Family and friends are invited to visit Duke’s Memorial Tribute page at www.fredcdames.com to post a condolence or share a memory or favorite story.

No funeral services will be held at this time, however, sometime next month, Jeff and April will host a brunch “on Duke”, in Duke’s honor, at the Stone City VFW Post in Joliet, IL, the date to be determined.

Share Your Memory of
Kenneth
Upload Your Memory View All Memories
Be the first to upload a memory!
Share A Memory
Plant a Tree