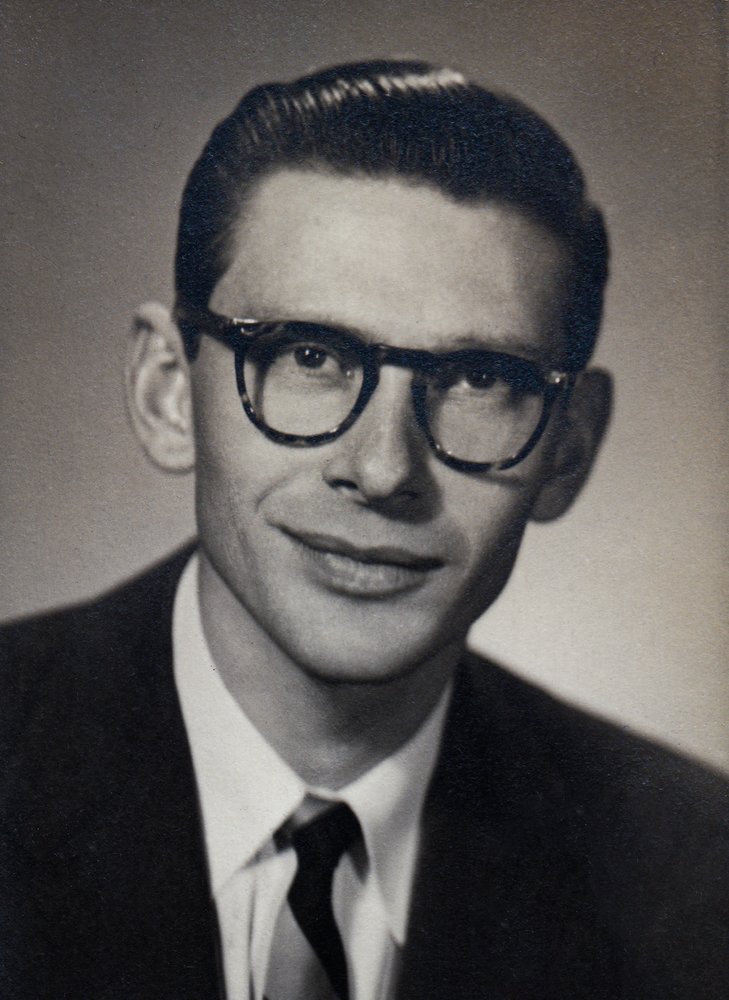 In 1946, Ed enlisted in the U.S. Air Force and served as Chief Mechanic on F-80 Shooting Star fighter jets in the 1st Fighter Group, 27th Squadron at March Air Force Base. He was honorably discharged in 1949.

Ed found the love of his life in nursing-student Sandy Holt, and they married on June 15, 1956. They were together for 56 wonderful years until Sandy’s death in 2012. The Elmhurst couple raised four beloved children: Brent (Suzanne) Ronne of Dewey, Brenda Ronne-Russell of Terre Haute, IN, Eric Ronne (the late Amy) of Wheaton, and Oed Ronne of Beaverton, OR.

After earning his B.S. in Speech from Northwestern University, Ed worked as a radio personality for stations such as WNUR, WAIT, and Moody Bible Institute’s WMBI, which featured his popular “Music Room” series and the “Ranger Bill” show, starring Ed as Gray Wolf (listen online at https://archive.org/details/OTRR_Ranger_Bill_Singles). As a broadcaster for WMBI, Ed also interviewed such luminaries as John F. Kennedy, Richard Nixon, Billy Graham, and the mayor of Seoul, Korea.

Ed later led communications for several organizations: Argonne Labs, the American Nuclear Society, and the Chicago Medical Society. He was also the first Director of Communications for Compassion International, traveling around the world to promote their cause. He helped produce the award-winning television special “Pat Boone Presents Compassion’s Children,” in which he appeared onscreen with the star.

Eclipsing all other accomplishments was Ed’s deep dedication to Jesus, witnessed chiefly in his loving devotion to his wife and children and his decades-long service at First Baptist Church of Elmhurst (now Cityview Community Church). There, Ed served as Deacon, taught Sunday School, helped lead boys in Christian Service Brigade, and contributed in countless other ways. After retirement, his service also included missionary work with his wife Sandy at HCJB radio in Ecuador and regular work at the local food pantry.

Even into his 90’s, Ed’s razor-sharp wit was always at the ready, charming caregivers and brightening every situation. And he was always ready to share his faith.

He was laid to rest on January 20, 2021 at Abraham Lincoln National Military Cemetery in Elwood, IL, in a small service led by his dear friend, Air Force Chaplain General John Wendel.

In lieu of flowers, donations to the Elmhurst-Yorkfield Food pantry are welcome and sincerely appreciated.

For information, please call (815) 942-5040 or visit his Memorial Tribute at www.fredcdames.com to share a favorite memory or leave an online condolence.

He was laid to rest on January 20, 2021 at Abraham Lincoln National Military Cemetery in Elwood, IL, in a small service led by his dear friend, Air Force Chaplain General John Wendel.

In lieu of flowers, donations to the Elmurst-Yorkfield Food pantry are welcome and sincerely appreciated.