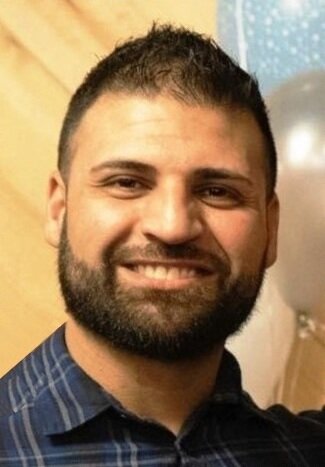 Joe Hernandez, III, age 36, of Joliet, and formerly of Oswego, passed away Tuesday, September 14, 2021, on his ninth wedding anniversary, at Edward Hospital, Naperville, following a courageous battle with esophageal cancer.

Joe was born July 31, 1985 in Aurora, IL, to Joe and Alba (Santiago) Hernandez.  He was raised in Oswego and was a graduate of Oswego High School.  He received his Bachelor’s degree in Exercise Science from Eastern Illinois University, Charleston, where he was a standout baseball player and scholarship athlete.  While attending EIU, he was visited frequently by major league scouts until an injury his sophomore year sidelined his baseball career.

Long before he joined the Joliet Police Department six and one-half years ago as a Patrolman, Badge #289, and member of the Honor Guard, he demonstrated his work ethic and dedication to advancing his career with Acceleration Sports Performance, XSport Fitness, and Oberweis Dairy.

Joe was a wonderful, loving and caring husband, father, son, brother and uncle.  His family felt blessed and he made his family proud.  He was a fearless protector and a wonderful provider who greeted everyone with open arms and evoked a sense of calm in all his interactions.  He enjoyed fishing, had a passion for reptiles, and most recently, took up cooking and mastering his smoker.

Joe’s legacy and leadership will live on in OVCM, Inc.

He was preceded in death by his grandfathers, Luis Santiago and Joe C. Hernandez; and Anna’s grandparents, Giuseppe and Anna DiDonna.

Face masks will be required at both the funeral home and the church.

In lieu of flowers, memorials in his name to an education fund for the benefit of his sons would be appreciated.

In lieu of flowers, memorials in his name to an education fund for the benefit of his sons would be appreciated.

Share Your Memory of
Joe
Upload Your Memory View All Memories
Be the first to upload a memory!
Share A Memory
Plant a Tree