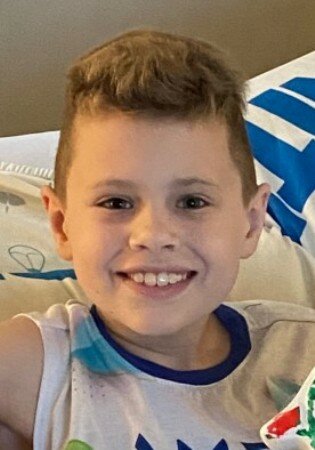 Austin Michael Degnan, age 9, passed away peacefully at his home in Channahon after a three year battle with Osteosarcoma on Monday, October 4, 2021, surrounded by the love of his family.  Austin was born in Palos Park, IL on July 26, 2012, the son of Jonathan and Carrie (nee Bettega) Degnan.  He was raised in Channahon, IL and attended Pioneer Path Elementary School.

Austin was a typical active boy.  Whether it was jumping on the trampoline, riding the moped with his brother, or playing soccer, he enjoyed being outside in the fresh air.  You could always count on Austin to have a positive outlook and a smile on his face.  With his shining personality and big heart, he always thought of his family first. One of his favorite pastimes was playing videogames with his brother and his dad. Austin will live on in the hearts of all who loved him.

In lieu of flowers, memorials to Pink Heals would be appreciated.

For more information please call the Fred C. Dames Funeral Home at (815) 741-5500 or visit his Memorial Tribute where you can share a favorite memory or leave a condolence.

In lieu of flowers, memorials to Pink Heals would be appreciated.

Share Your Memory of
Austin
Upload Your Memory View All Memories
Be the first to upload a memory!
Share A Memory
Plant a Tree