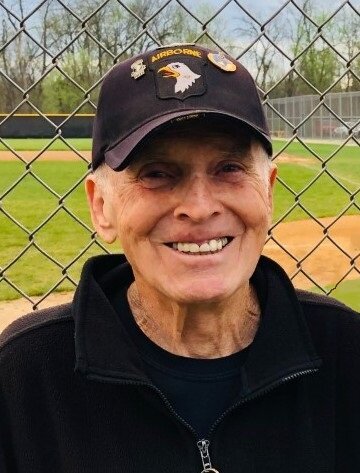 Richard “Dick” Parker, 82, of Morris, passed peacefully in his sleep Monday, January 10, 2022, at Lightways Hospice Home in Joliet. Born September 14, 1939, in Verona IL, he was the son of the late John and Mildred (Strum) Parker.

Dick attended schools in Verona and graduated from Mazon High School in 1957. On September 29, 1962, he married Jean Welsh of  Mazon. He was then drafted into the United States Army where he spent two years in the 101st Airborne making over 1000 jumps! Dick and Jean were married for 59 years. He enjoyed being in the Starved Rock Runners Club with his daughter Dana and annual trips to the Boundary Waters with family. Most people, who knew Dick, knew his love for fastpitch softball and how great of a pitcher and teammate he was. He worked for Reichhold Chemical as a maintenance mechanic for many years. Family was extremely important especially coaching his daughters and being there for his grandchildren. He loved spending his summers in his pool and gardening with his family. He also taught his granddaughter how to can and make moonshine.

Preceding him in death were his parents, his daughter, Lissa June Parker, his wife, and his sister, Cory Parker.

Memorials can be made to Lightways Hospice of Joliet.

Visitation for Dick Parker will be Saturday, January 15, 2022, from 10:00 a.m. until the time of funeral services at 12:00 Noon at Fred C. Dames Funeral Home, 1201 W. Route 6 at Deerpath Drive in Morris. Interment will follow at Sample Cemetery with Military Honors. For information, please call (815) 942-5040 or visit his Memorial Tribute at www.fredcdames.com where you can share a favorite memory or leave a condolence.

Memorials can be made to Lightways Hospice of Joliet.