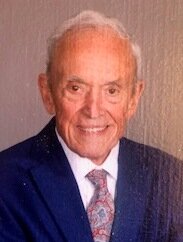 Born in 1930, Louis passed away peacefully at home with his family present on January 15, 2022. Louis, age 91, is survived by his loving wife of 60 years, Joan (nee Samios), daughter Marina Dimas, son John Dimas, and granddaughter Alexandra (Sean Murray). He was preceded in death by his parents Theodore and Katherine Dimas, and his brothers Reverend Constantine (Coola) and George (Georgene).

He returned to Joliet to marry the love of his life, Joan, in 1962 at All Saints Greek Orthodox Church, where Louis was an organist and director in the choir in his youth, served as President of AHEPA, and was a member of the church board.

Louis served as President of the Will County Cancer Society, was a member of the Joliet Rotary Club, and served on the board of the Boy Scouts of America.

Upon retirement, Louis spent many years visiting all 50 states and traveled around the world twice with his family. He loved hunting with his friends in Wyoming and spending afternoons golfing. If he wasn’t cheering for the Cubs or the Bears, you could find him enjoying listening to Frank Sinatra, dancing the night away with his wife, reading and watching shows about history, or entertaining his friends and family at home. Something we will always remember about him is his infectious laugh and how he would crack himself up with his jokes, which made us all laugh.

No one could have cherished a wife more, or had a happier marriage. Louis loved his children and his granddaughter boundlessly and looked forward to and welcomed every minute he had with them. He showed an endless curiosity and zest for life and did not take anything for granted. Louis had a true voracity for learning and a truly generous spirit.

Louis was always able to make all those around him feel important, heard, and loved. His wit and sense of humor made all surrounding him feel like they were the pinnacle of humor. Louis provided unseen acts of kindness without regard for recognition throughout his life. If there was a time anyone around him needed help, he was there without hesitation. Louis continually showed humility as he worked without tire in every facet of his life. The world has lost an example of a wonderful human being and gentleman.

Share Your Memory of
Dr. Louis
Upload Your Memory View All Memories
Be the first to upload a memory!
Share A Memory
Plant a Tree