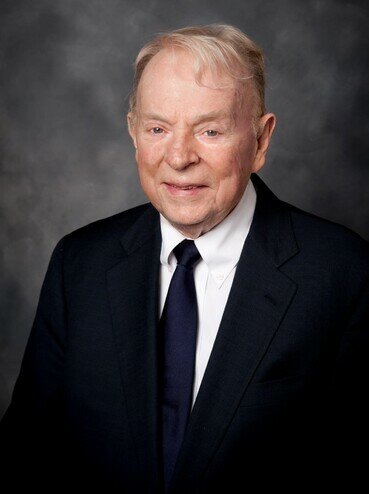 John R. “Jack” Rogers age 94, of Joliet, IL passed away peacefully at home, Monday morning March 7, 2022.  Jack was born July 17, 1927, to the late Margaret (Kane) and John J Rogers in Chicago, IL where he was raised and educated.  He was a United States Army Veteran.

On June 18, 1955, he married Joan Drew, the love of his life at St. Ferdinand Catholic Church, Chicago, Illinois. They relocated to Joliet in 1962 where they raised their family.

In 1957, John and Jim Wermer founded Wermer and Rogers in Joliet that is in operation today, now known as Wermer, Rogers, Duran & Ruzon, LLC, the largest accounting firm in Will County.  Mr. Rogers continued to be a fixture at the firm until March of 2019.

Jack was very involved with the Sacred Heart Parish in Joliet and many local civic and cultural organizations including the Joliet Region Chamber of Commerce, the Advisory Board of St. Joseph Medical Center, the Rotary Club of Joliet, Cornerstone Services and the Board of the Rialto Square Theatre Foundation. Jack was awarded the Rabbi Herschman award for community service in 2007 and in 2017 he received the lifetime achievement award from the Joliet Region Chamber of Commerce and Industry.   His professional memberships were numerous and his lifelong dedication to fiscal responsibility earned him recognition as an honorary member of the Illinois CPA Society in June of 1994.

In addition to his beloved wife of 62 years, Joan, he is also preceded in death by his parents; sister, Marjorie Rogers; brother, Robert (late Margaret) Rogers.

In lieu of flowers memorials in Jack’s name can be made to Cornerstone Services www.cornerstoneservices.org  or Sacred Heart Church, 337 S. Ottawa St., Joliet, IL 60436.

In lieu of flowers memorials in Jack’s name can be made to Cornerstone Services www.cornerstoneservices.org  or Sacred Heart Church, 337 S. Ottawa St., Joliet, IL 60436