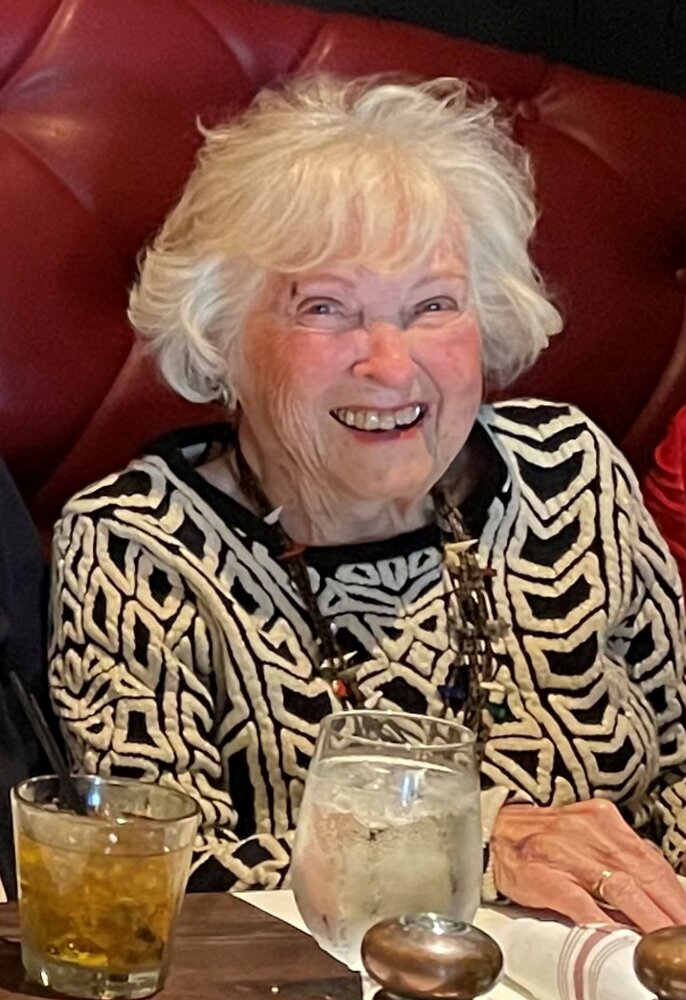 Hazel G. Rogers, passed away at the age of 99, on Tuesday, March 22, 2022, at Lightways Hospice, surrounded by the love of her family.  Hazel was born on April 4, 1922 in Austin, Texas, to Hazel Bustin Goldsmith and Marcus Hale Goldsmith.  She was baptized at First Baptist Church in Austin in 1930.  Hazel graduated from Austin High School in 1938 and the University of Alabama in 1942, where she was a proud member of Delta Delta Delta Sorority.

After graduation, Hazel taught Home Economics starting in Alabama, then on to Florida, and returned to Austin, where she taught at Austin Junior High School.  During the summer of 1944, she met Dr. James D. Rogers, a captain with the 10th Mountain Division, who had just arrived home Camp Hale Colorado. It must have been love at first sight because they were married on August 26, 1944 at First Baptist Church in Austin. Their love story lasted for 75 years. Hazel taught school, and then worked for Braniff Airlines for a short period. When James returned from the war, where he participated in the “Battle of the Bulge”, they moved to Rochester, Minnesota where he renewed his participation as a fellow in surgery at the Mayo Clinic.  They lived on one of the new prefabricated homes that the clinic built for veterans returning to finish their fellowships.

Hazel worked in one of the laboratories at St. Mary’s Hospital before leaving to deliver her first child in 1947 and their second in 1948.  Hazel and James moved to Joliet in 1950 and finally bought a house where a vacant lot provided the possibility of a tennis court, which was a priority.

Hazel was a past President of Will Grundy County Medical Auxiliary for two years, President of Women of Rotary, member of the Joliet Library Board for six years, a volunteer at the Joliet Free Medical Clinic and a member of the Delta Delta Delta Sorority Alumni group in Joliet.  She was active in the Joliet Tennis Club, the Crystal Downs Country Club of Frankfort, Michigan, and the Crystal Lake Yacht Club, also of Frankfort, Michigan, and the Union League Club of Chicago.

Along with her husband and family, Hazel spent many years enjoying tennis, skiing, and traveling to many counties all over the world.  They enjoyed entertaining in their backyard swimming pool.  She also enjoyed playing bridge with her several bridge clubs.

She is preceded by her husband, Dr. James D. Rogers; one grandson Grant Joseph Zaler (2021), her parents; one sister, Marian Christman; and one brother, Marcus H. Goldsmith.

A Memorial Visitation for Hazel G. Rogers will be held on Saturday, April 2, 2022 at the Fred C. Dames Funeral Home, 3200 Black Rd. (at Essington Rd.), Joliet, IL, from 1:00 p.m.until the time of service at 5:00 p.m. with the Rev. Graham Rogers officiating.  As it was Hazel’s request, cremation rites have been accorded.  Final interment will take place at Abraham Lincoln National Cemetery in Elwood, IL at a later date.

In lieu of flowers, the family requests memorial contributions made to Judson Church, Lightways Hospice or a charity of your choice.

For more information, please call 815-741-5500 or visit her Memorial Tribute at www.fredcdames.com where you can share a favorite memory or leave an online condolence.

As it was Hazel’s request, cremation rites have been accorded.

In lieu of flowers, the family requests memorial contributions made to Judson Church, Lightways Hospice or a charity of your choice.