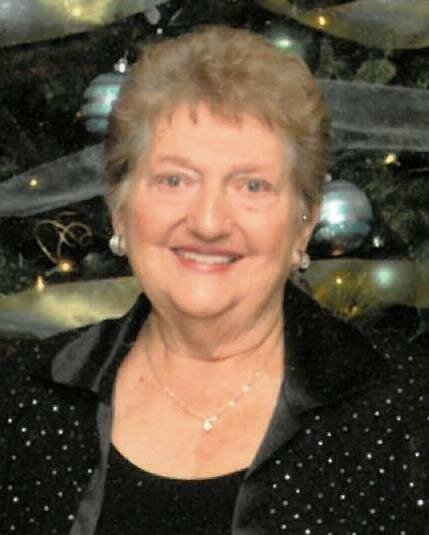 It is with great sadness we announce the passing of our beloved mother, Dolores R. “Dee” Gallo. Dolores passed away peacefully on October 9, 2022, at the age of 97 at Lightway’s Hospice Home, surrounded by her loving family.

Dolores was born in Reno, Nevada on February 23, 1925, to the late John R. and Rose Teresa (Pino) Ginocchio. She spent her childhood years on the Ginocchio Ranch on Old Hwy 395, now known as Virginia Ave. During Dolores’s earlier years, you would often find her on the ranch milking cows, rounding up chickens and riding horses throughout the ranch marveling up over at the majestic snow top mountains that overlooked the family ranch.

During World War II, Dolores met her sweetheart Cam at a naval base dance in Reno. After the World War, the two were married on April 28, 1946, at St. Thomas the Aquinas Cathedral in Reno and embarked on a 63-year marriage that came to shape many lives in the Joliet Community. After their wedding, Dolores and Cam moved to Montreal Canada for about a year to help care for Cam’s mother who was ill before settling in Joliet to begin a family.

Dolores and Cam, together with her late brother-in-law Victor Gallo teamed to purchase the Rialto Cleaners & Dryers, located in The Rialto Square Theater Building at 25 E Van Buren St in Joliet. Later, as Joliet continued to grow westwards, and the business grew, they relocated and built a new Dry-Cleaning facility at 819 W. Jefferson St. for forty-five years before retiring. After retiring, Dolores and Cam spent many enjoyable years traveling, golfing, dancing, planting, and tending to their home vegetable garden each year with much pride and joy, but above all else, she especially enjoyed spending time with her family and friends.

Dolores was a lifelong parishioner of St. Paul the Apostle Catholic Church, and the St. Paul Paulite’s Group, Provena St. Joseph Hospital Ladies Auxiliary and St. Patrick’s Residence Guild. In addition, Dolores served on the Joliet Area Community Hospice Guild, shared her talents as a Bakery Angel as well as was a Committee Member for Hospice’s Annual Puttin’ on the Glitz Fashion Show. For many years, Dolores cherished her time golfing each Tuesday at Woodruff Golf Course on the “Tuesday Morning Hookers” and on Thursdays at Inwood on the “Strokers Golf League”.

Visitation for Dolores R. Gallo held on Friday October 14, 2022, at the Fred C. Dames Funeral Home, 3200 Black Rd. from 9:00 am until 11:00 am. A mass of Christian Burial will follow at 11:30am at St. Paul the Apostle Catholic Church, 18 Woodlawn Avenue. Enshrinement will follow at Woodlawn Memorial Park Mausoleum, where she will reunite with her beloved Cam to dance once again on heavens dance floor.

In lieu of flowers, memorials in Dolores’s memory can be made to the Gallo-Lenhart Scholarship Fund at Lewis University, One University Parkway, Romeoville, IL 60446 or to Light Ways Hospice of Joliet would be appreciated.

For more information, please call the Fred C. Dames Funeral Home 815-741-5500 or visit her Memorial Tribute at www.fredcdames.com where you can share a favorite memory or leave a online condolence.

In lieu of flowers, memorials in Dolores’s memory can be made to the Gallo-Lenhart Scholarship Fund at Lewis University, One University Parkway, Romeoville, IL 60446 or to Light Ways Hospice of Joliet would be appreciated.