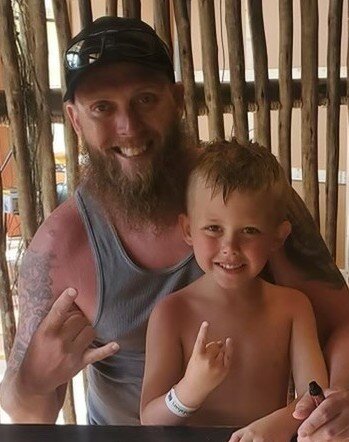 Michael spent his impressionable years in Georgia before returning to the Joliet area to be near his family and to be a full time father.  His life changed with the birth of his son, Cruz. It was at this time that he became a better man, an amazing father, and the best version of a son, brother, and uncle that a family could ask for.  He was the life of the party, a well known prankster, and had an overwhelming personality with an infectious smile and laugh.  Fall was his favorite time of the year because it meant horror movies and his favorite holiday, Halloween.  If he wasn’t enjoying a cold beverage or some Apple Crown at a concert with friends, he was out on his Harley. There will be a void left in the hearts of all who loved him. Michael will be forever missed.

He is preceded by his paternal grandparents, Charles E. Moon and Rose Marie Kolakowski; his aunt Donna Brown; and his cousin, Jordan Korn.

A Memorial Gathering for Michael Alan Moon, II will be held on Thursday, October 13, 2022, at the Fred C. Dames Funeral Home, 3200 Black Rd. (at Essington Rd.), Joliet, IL, from 3:00 p.m. until the Sharing of Memories at 6:00 p.m.  As it was his request, cremation rites have been accorded.  The family requests that all those in attendance please wear their favorite Harley Davidson or heavy metal band t-shirt.

In lieu of flowers, memorials to the family for the future education of his son, Cruz, would be appreciated.

For more information, please call 815-741-5500 or visit his Memorial Tribute where you can share a favorite memory or leave an online condolence.

In lieu of flowers, memorials to the family for the future education of his son, Cruz, would be appreciated.