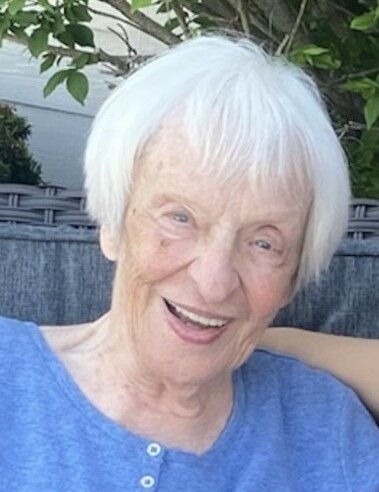 Ruth G. Hughes, age 94, of Joliet, IL, passed away peacefully, with beloved family by her side, December 5, 2022 at Lightways Hospice Home, Joliet, IL.

She was born June 29, 1928 in Breslau, Germany, the daughter of the late Frieda and Willi Schulz.  She met and married her husband, Air Force Master Sgt. James P. Hughes and they came to the United States in 1952.  James’ career in the military brought the family to many areas of the country and later settled in Joliet in 1964.

Family was the most important thing to Ruth.  She loved sharing stories of her life in Germany and teaching them the German language.  She took delight in cooking and baking, especially alongside her sister Gertie.  She also enjoyed crocheting and reading the daily horoscope in the newspaper.  Ruth enjoyed her daily walks with friends for many years and had a wonderful relationship with many of her close neighbors, with much appreciation from her family.

She was preceded in death by her beloved husband, James; her parents; her sister, Gertie “Nana” Delmont; and granddaughter, Melanie Sensenbrenner.

In lieu of flowers, memorial donations may be made to Lightways Hospice, 250 Water Stone Circle, Joliet, IL 60431.  The family so appreciated their care and kindness, especially Mary Jo and Moira.

Memorial Visitation for Ruth G. Hughes will be Tuesday, December 13, 2022, from 3:00 p.m. until the time of her Memorial Service at 6:00 p.m.  As it was her wish, cremation rites have been accorded.  There will be a future inurnment of Ruth and James in the spring at Abraham Lincoln National Cemetery, Elwood, IL.

For more information please call 815-741-5500 or visit her Memorial Tribute at www.fredcdames.com where you can share a favorite memory or leave an online condolence.

In lieu of flowers, memorial donations may be made to Lightways Hospice, 250 Water Stone Circle, Joliet, IL 60431.