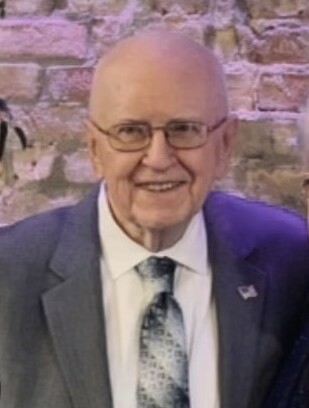 Robert H. Feeney, passed away peacefully, at the age of 90, on Tuesday, January 3, 2023, surrounded by the love of his family.  Robert was born on June 17, 1932, the son of the late Robert and Josephine (nee Sing) Feeney.  He was born and raised in Joliet and was a graduate of Joliet Catholic High School, class of 1951. After high school Robert joined the U.S. Air Force, proudly serving his country until being honorably discharged in 1956 earning his National Defense Service Medal and a Good Conduct Medal. He retired from Caterpillar after 37 dedicated years of service.

Bob was active in his community throughout the years.  He was very devoted to his faith and was active with Holy Family Parish.  He served as a Eucharistic Minister for several years and was the former Athletic Director and coach at St. Andrews School in Romeoville as well as an IHSA basketball and baseball official. Bob enjoyed volunteering for Meals on Wheels and had a huge love of sports.

Bob and Maureen enjoyed vacationing.  They spent their winters in Chandler, AZ and The Villages, FL.  While in The Villages, Bob was an avid golfer who was proud of the fact that he achieved two hole-in-ones.  They also enjoyed traveling together to London, Ireland, Switzerland, and Hawaii.  Bob always made time for traveling with his wife and loved taking his grandkids on adventures.

He is preceded in death by his parents; two sisters, Marjorie (J. Richard) Hatting and Carole Gilding; and great-granddaughter Eloise Havey (2022).

Funeral Services for Robert H. Feeney will be held at 9:15 a.m., on Saturday, January 7, 2023, from the Fred C. Dames Funeral Home, 3200 Black Rd., Joliet, IL, to Holy Family Parish, 600 Brook Forest, Shorewood, where a Mass of Christian Burial will be celebrated at 10:00 a.m.  Interment will follow at Resurrection Cemetery in Romeoville with full military honors held under the auspices of the United States Air Force.  Visitation will be held at the funeral home on Friday from 4:00 to 7:00 p.m.

In lieu of flowers, memorials may be made in his name to United Mitochondrial Disease Foundation or Holy Family Parish.

For more information please call 815-741-5500 or visit her Memorial Tribute at www.fredcdames.com where you can leave an online condolence or share a favorite memory.

In lieu of flowers, memorials may be made in his name to United Mitochondrial Disease Foundation or Holy Family Parish.