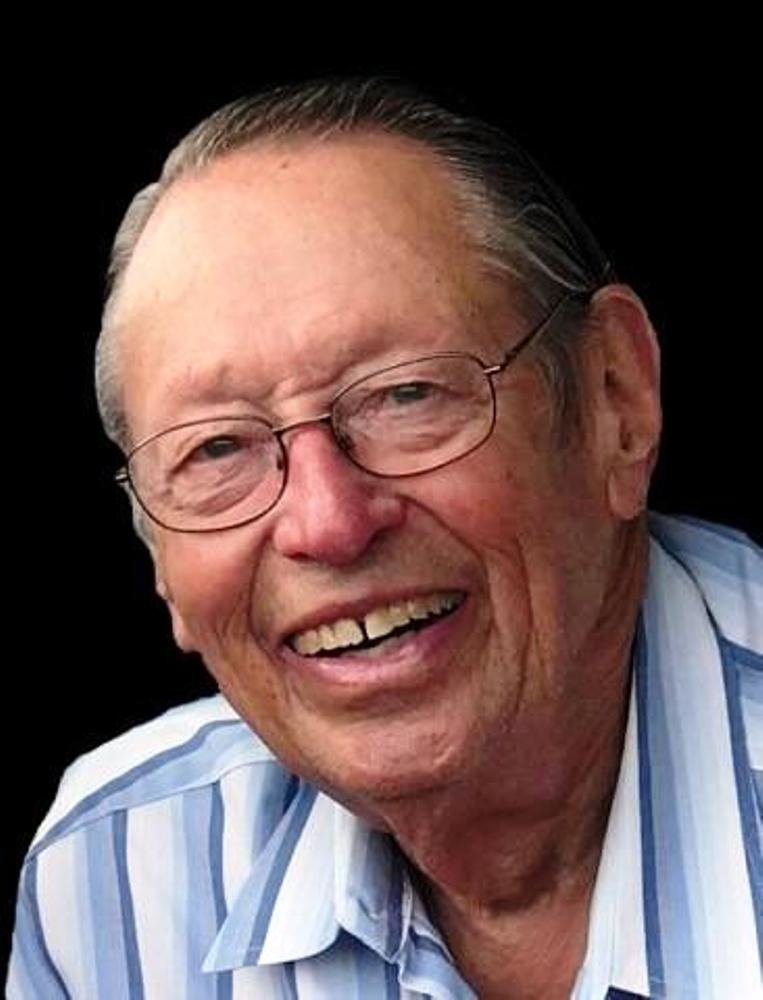 Please share a memory of Joseph to include in a keepsake book for family and friends.
View Tribute Book

Joseph L. “Joe” Adler, age 87, of Joliet, left this world June 9, 2018, at Loyola University Medical Center, Maywood, from injuries sustained in a motor vehicle accident two days earlier.  A man of deep faith, he set out each day to fill this world with his love for others.

Born August 30, 1930.  He was the son of the late Joseph L. and Rachel Marie (nee Heintz) Adler. He attended St. Raymond’s Grade School, Joliet Catholic High School and the University of Notre Dame and received a commission in the United States Air Force and served at Dow Air Force Base in Bangor, Maine, and Misawa Air Force Base in Misawa, Japan.

Preceded in death by the love of his life, Jodie, on July 4, 2014, infant daughter, Margaret Mary, son, Michael, and brother, Jack (Dorothy) Adler.

Joe and Jodie were members of the Sacred Heart Parish Community in Joliet, which instills the spirit of service as a foundation of their beliefs. During the winter months, they loved attending Mary Mother of Jesus Inclusive Catholic Community in Sarasota, Florida.

He is past president of the J.L. Adler Roofing and Sheet Metal Company, founded in 1926, a 4th generation company with his three sons, three grandsons and a granddaughter continuing the tradition of professional roofing and sheet metal work in Joliet and the Northern Illinois area.

Joe Adler was an artist; not with a paint brush, but with his creativity and persistence in getting things done.  He built beautiful gardens, habitat for birds and cared most deeply about all his brothers and sisters in need on this planet.  He was working towards building heaven on earth, where all God’s people would be one, regardless of their color or creed.  It didn’t matter in what circumstance you were born into; his respect, love and treasure went out to the least amongst us.  Together with Jodie, they were regional directors of Christian Family Movement; started the Will County Conference on Religion and Race; Founding Couple of the Spanish Community Center and received “State of Illinois Senate Recognition” for their work therewith; Members of the Chicago Catholic Jewish Dialogue Partnership; Founding Couple of the Nationwide “Tip the Maids” Movement; Founding Couple of the Young Christian Nurse’s Movement.

Joe was a Past President of the Chicago Roofing Contractors Association; Past Board Member of the Vilaseca Day Care Center and the Boys and Girls Club of Joliet; Founding Member of Will County Habitat for Humanity, Spanish Community Center of Joliet and the University of Notre Dame Senior Alumni Board.

Joe was an avid sports fan.  He built shrines for the Cubs and Notre Dame. One of his favorite treats was sharing a ball game with his sons, grandkids and sister.   He loved Notre Dame and believed that not only did God make Notre Dame Football #1, but that the values of Notre Dame went far beyond football.

A Memorial Mass for Joe Adler will be celebrated at 10:30 a.m. on Saturday, June 16, 2018, at the Cathedral of St. Raymond Nonnatus, 604 N. Raynor Avenue, Joliet.  Please join us at a reception immediately following the mass to celebrate Joe’s life.

In lieu of flowers, memorials in his name are appreciated. Sacred Heart Parish at 337 S. Ottawa Street, Joliet, Illinois 60436, which is in great need at this time.  Joe, also, held Will County Habitat for Humanity and Boys and Girls Club of Joliet dear to his heart.

Fred C. Dames Funeral Home is in charge of arrangements.  For more information, please call 815-741-5500 or visit his Memorial Tribute at www.fredcdames.com.

A reception for all relatives and friends will immediately follow the Mass.