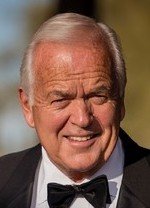 James E. “Jim” Bedeker passed away on January 4, 2020, after a stubborn and hard fought battle against cancer.

Jim was preceded in death by his wife, Sally; his son, Michael; daughter-in-law, Brenda; his parents, Elmer and Juanita; and brothers, Jay Bedeker and Jeff Bedeker.

Jim was born to the late Elmer and late Juanita in Streator and attended Newark High School.  Jim was a father, grandfather, entrepreneur, inventor, truck driver, horseman and farmer.

After driving for a few years, post high school, Jim founded A&R Transport with one truck.  Together with his trusted partner Paul Sweeden, Jim built A&R into the premier bulk plastic hauler in the country.  When Jim sold the company it had grown to hundreds of trucks with 37 terminals in 19 states, serving customers all over the world.  Jim also invented and patented many technologies used today in that industry.

Jim was a respected horse breeder in the Arabian and Friesian horse community.  Together with his late wife Sally they travelled the world winning championships and making numerous friends.

Jim was most at home in his farm fields.  He was a farmer at heart.  He was constantly working on his crops – or at least as much as Mother Nature would allow.  Despite the cancer that weakened him, Jim worked his fields until a few days before his passing.

In all of his businesses, Jim’s word was his bond.  He preferred to do business with a handshake and expected others to be as honorable.  Despite meeting several who conducted themselves otherwise, Jim always maintained his integrity.

Jim was devoted to his family.  He stood by his wife Sally all the way until her passing and was the true embodiment of his marriage vows.

He loved spending time with his children, Mike and Cindi, their spouses and children.  Jim was renowned for having crazy adventures after crazy adventure.  Each of his grandchildren, Cortney, Tara and Michael, have numerous special memories of Grandpa Jim; be it in Paris, Puerto Rico, Disney World, Jupiter Island, Cave Creek or Illinois. There are not enough words to summarize Jim’s life, legacy and the impact he had on so many people through his work and generosity.  Jim lived his life full speed with an unstoppable work ethic.  He loved a great joke (or practical joke) and loved to laugh.  Jim was bigger than life and the world has lost a one of a kind person.  He will be greatly missed.

Many thanks to the people who helped Jim and the family tremendously during this difficult time: Darren Sackman, Charity McMullin, Jenny (Bedeker) Gaworski, Shelly Daly, Miguel Gutierrez and Able Gutierrez as well as the staff of Joliet Area Community Hospice.  Jim’s family is forever grateful to you for your love, time and support.

On Saturday January 11, 2020 all friends and relatives are invited to gather at Jennifer’s Garden, 555 Gore Road in Morris for a reception to celebrate Jim’s life beginning at 12 Noon.

In lieu of flowers, have a Miller Lite, a Bombay Sapphire Gin and Tonic or a glass of Caymus in memory of Jim.

For more information please call (815) 942-5040 or visit his Memorial Tribute at www.fredcdames.com

In lieu of flowers, have a Miller Lite, a Bombay Sapphire Gin and Tonic or a glass of Caymus in memory of Jim.