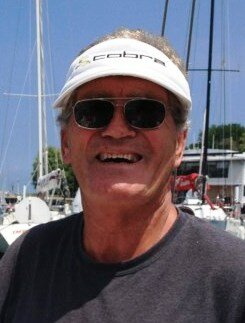 Please share a memory of James to include in a keepsake book for family and friends.
View Tribute Book

James Joseph Mackey, age 76, passed away Monday, January 17, 2022, after complications from multiple strokes. He was born on August 20, 1945 in Joliet, IL. Jim was raised on a farm in Elwood, IL where he spent summers pipe dreaming on an International tractor. Jim was a graduate of Joliet Catholic High School, Millikin University (Delta Sigma Fraternity), and earned a Master’s Degree in Education from the University of Indiana. He resided in the Joliet area most of his life where he raised his family. Jim devoted his life to teaching physical and driver’s education for over thirty years at Montini, Joliet Central, and Romeoville High Schools. He coached football and wrestling including three Illinois State Wrestling Champions. Jim was happiest sailing his boat, golfing with his wife and daughters, biking, landscaping, and winning at cards. His retirement was spent enjoying family and friends in Fort Myers Beach, FL.

Cremation rites have been accorded. A Memorial Gathering for James Mackey will be Friday, May 13, 2022 at the Fred C. Dames Funeral Home, 3200 Black Rd., Joliet, from 2:00-6:00 p.m.  A Mass will be held Saturday, May 14, 2022 at Holy Family Catholic Church, 600 Brookforest Avenue, Shorewood, at 10:00 a.m. Contributions in memory of Jim can be made to St Jude's Children Hospital and would be appreciated.

Contributions in memory of Jim can be made to St Jude's Children Hospital. All other correspondence for the family can be sent to Jillian Mackey at 589 E. Park Avenue Elmhurst, IL 60126.